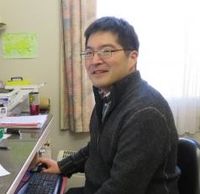 Ami was born in Japan but moved to sunny Dunedin while still in nappies and calls this place home. Having completed his education here, including time at Otago Boys High School and University of Otago Medical School, Ami graduated in 2001 (the same class as Dr Pettigrew and Dr Neylon). He spent his junior doctor years in Dunedin and Ireland, specialising in emergency medicine.After coming to his senses, he changed to general practice in 2008 when he did training in rural general practice in Hokitika and Cromwell. Ami has been with the team at Dunedin North Medical Centre since the start of 2009 and has gradually become a more permanent fixture, now working as a permanent locum for Dr Bevin four sessions a week.

When he’s not at work, Ami is trying to ride his mountain bike or attempting various DIY projects at home (with varying levels of success), but spends most of his time as a dad.

Dr Ami Nukada is available at the following service: