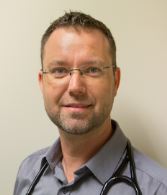 Bart originates from Flanders in Belgium. After he first qualified as a nurse he worked with oncology and terminally ill patients. He then decided to become a phycician and in 2003 he graduated in Medicine from the Erasmus University Rotterdam in the Netherlands. He worked for 2 years in Internal Medicine with special interest in Hematology and Oncology. In 2009 he finished his further training for Family Medicine at the University of Maastricht.

Bart first came to NZ in 2011 where he worked in Waiuku until May 2012. After returning to the Netherlands Bart and his wife Conny quickly realized they wanted to return to NZ with Queenstown as an ideal location. Bart joined the practice in 2014 and is looking forward to make Queenstown the family home, for himself, Conny and their 2 young children.

Dr Bart Vangronsvelt is available at the following service: