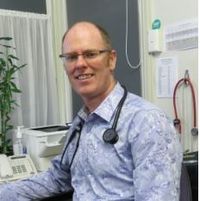 Daniel is Christchurch born but Dunedin bred and decided in 1996 to follow his father into the medical profession. Six years later he was still sure that he wanted to be a doctor but equally sure that he didn’t want to be a surgeon. After 4 years of experiencing various specialities throughout the hospital, most notably paediatrics and emergency medicine, he was certain that the only speciality that was going to enable him to practice a truly broad range of medicine, and include ample patient contact time and continuity, was general practice. Daniel loves the general practice environment, particularly the privilege of looking after the medical care of people over many years, and often several generations. Daniel completed the stage one general practice training programme in 2007, stage two of which he will complete this year in order to obtain his fellowship.He has broadened interests even  further since training in general practice and has completed courses in skin cancer medicine/minor surgery as well as currently being partway through his Diploma in Sports Medicine. This last course of study has been prompted by him taking on the care of the Otago ITM Cup rugby team in 2009 (previously called the NPC). You may  see him on the field from time to time when Otago plays. Dan is a member of the clinical governance group For WellSouthPrimary Health Organisation.

When not at work he spends time with his family, with whom he enjoys cooking, music, gardening, travelling,  photography and the great outdoors. He is an active member of BATCH, a breakfast church which operates under the Highgate Presbytarian Church.

Dr Daniel Pettigrew is available at the following services: