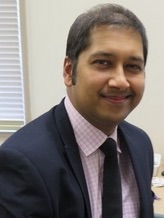 Dipankar ‘Dip’ Saha is a UK trained GP.  Having first qualified from The Royal Free and University College Medical School in London in 2003,  he then spent several years undergoing Basic Surgical Training in the North of England as he initially wanted to be a surgeon. However, over time he came to realise that his true calling was not surgery but instead General Practice and being a family physician.  He entered GP training in the UK in 2008 and qualified as a GP in 2011, and in his own words “he hasn’t looked back since”.  Dipankar imigrated to New Zealand in mid 2015 with his Kiwi wife and beautiful baby daughter.  He joined the team at Centralmed in early 2016 as a full time GP.  Dipankar believes that his previous surgical background combined with his GP training makes him a truly general General Practioner with a broad knowledge base in both medicine and surgery.  Whilst thoroughly professional but also completely approachable in equal measure, as well as being happy to discuss his patients’ problems, conditions and diagnosis with them at depth (being a great believer in improving health through improving individual patients’ health education and knowledge of their conditions), he is also equally happy to discuss the finer points of blues/rock guitar playing, Formula One racing, the lastest John Grisham novel or just why in his opinion the HitchHikers Guide to the Galaxy is the greatest book ever written.

Dr Dipankar Saha is available at the following service: