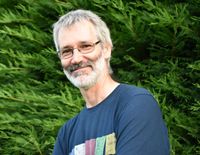 Gordon qualified from Glasgow University in 1984 and then rotated through a number of hospital specialties until 1989
when he commenced General Practice in Glasgow.

In 1992 Gordon emigrated to New Zealand and worked at Whangamata until 2007 then joining us at Katikati Medical Centre.
Since arriving in NZ, Gordon has job shared with his wife, Dr Susan Blake.

Gordon is a fellow of the Royal New Zealand College of General Practioners and holds a Diploma in Obstetrics and Gynaecology.
He maintains an interest in all aspect of family medicine including dermascopic skin examinations and minor surgical procedures.

Another of our doctors that enjoys the outdoors, Gordon can be found on his bike, in his kayak or wearing boots tramping in the hills.
He also maintains a strong interest in history.

Dr Gordon Miller is available at the following service: