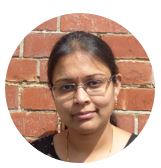 Prasanna is from India where she graduated from the Maharashtra University of Health Sciences. She and her husband came to New Zealand in 2006 where Prasanna began her career in general practice.

In the years since she has worked at medical centres in Hamilton and Wellington.

Prasanna loves the ethnic and cultural diversity of New Zealand and enjoys working with patients of different ages, socio-economic backgrounds and cultural beliefs.

The family moved to Dunedin late in 2017 when Prasanna’s husband took a job as a trainee cardiothoracic surgeon at Dunedin Hospital. Prasanna joined the MHC team in early 2018.

Dr Prasanna Govindaraj is available at the following service: