We are an urban practice servicing the population of Mt Wellington and its surrounding suburbs. We aim to provide the highest quality and affordable healthcare in an environment where people feel comfortable, valued and respected.

We are a Cornerstone Accredited practice.

Our team has 7 Doctors, 3 Practice Nurses and 2 Receptionists.

Doctors:
Dr Jim Kriechbaum
MBChB, Diploma of Obstetrics, Diploma of Child Health, Diploma of Occupational Medicine, Fellow of the NZ College of General Practitioners. Jim trained at Auckland Medical School and graduated in 1985. He then worked in Paediatrics and Obstetrics both in N.Z. and the UK. He completed the GP Training Programme and has been in General Practice since 1990. Jim established this practice in 1993.

Dr Martin Ng
MBChB, Diploma in Obstetrics and Gynaecology, Fellow of the Royal NZ College of General Practitioners. Martin was born in Malaysia, trained at Auckland Medical School and graduated in 1996. He then worked at various hospitals in Auckland for 3 years. Following that, he completed the GP Registrar programme over a year and has been in General Practice since. Martin joined the practice in 2001.

Dr Soshamma George
Soshamma graduated from CMC Vellore in India and then specialised in Dermatology with a Diploma and an MD from Madras University. She spent 2 years in the UK as a Dermatology registrar working at the Leicester Royal Infirmary. She worked as a clinician and teacher in a medical college & hospital and had 27 published papers until she moved to NZ. She has worked as a General Practitioner in NZ since 2003, taking the PRIMEX exam in General Practice in 2004 and has completed her fellowship. Her special interests include Dermatology, Venereology and Women's Health.

Dr Ruth Lumsden
BSc, MBChB, Diploma in Obstetrics and Gynaecology, Fellow of the Royal NZ College of GPs. Ruth trained at Auckland Medical School. Since completing the General Practice Training Programe in 1993, Ruth has worked in general practice including community women's health and high schools, and enjoys its diversity.

Dr Janine Bycroft
MBChB, Diploma of Obstetrics, Diploma of Paediatrics, Masters in Public Health (Hons), Fellow of the Royal NZ College of General Practitioners. Janine trained at Otago Medical School and graduated in 1990. She completed the GP Training Programme in 1994 and then further studies in Public Health in 2004. She works part time at the practice and keeps busy with roles in a DHB, PHO and leading a charitable trust. She enjoys the variety her multiple roles provide and has special interest in quality improvement, long-term conditions, shared care, child health and e-health.

Dr Kirsty Good
MBChB, Fellow of the Royal New Zealand College of General Practitioners. Kirsty trained at Auckland Medical School, graduating in 2003. She worked in Auckland and Sydney, and spent time in Emergency Medicine before starting the General Practice Training Programme in 2007. She enjoys all aspects of family medicine.

Please note that Saturday clinics are for URGENT cases on a walk-in basis only.

After hours advice is available on our practice phone number: (09) 570 2999. Your call will be answered by a nurse. For emergencies, please ring 111.

This practice is enrolling new patients.

Fees are based on a 15 minute consult for enrolled and funded patients. There may be extra charges for extended consultations, materials and procedures.

For patients who are NOT ENROLLED with our practice our fees are:

A patient portal is a secure online tool provided by GP practices that can allow convenient access to your health information as well as interaction with the practice e.g. booking…

Your GP's surgery is far more than a place to go when you are feeling unwell and needing a quick cure. The doctor who sees you has gone through an…

Minor surgery is commonly provided in primary care practices, providing fast, competent removal and biopsies of skin lesions. Other services include cosmetic work such as removal of benign moles and…

Each GP surgery or primary care practice will have its own procedure for repeat prescribing but the following rules are common to most, if not all. Patients who are well-known…

Liquid nitrogen is a fast, effective treatment provided in many practices to treat viral warts, sun damaged skin, skin tags and many benign cosmetic lesions. It comes in a container…

Immunisations are provided at all primary care practices and are one of the most important services they provide. Immunisation has led to the decline of many lethal diseases including meningococcal…

All women who have ever been sexually active should have regular cervical smear tests every three years between the ages of 25 and 69. This includes women who have been…

An ECG is a recording of your heart's electrical activity. Electrode patches are attached to your skin to measure the electrical impulses given off by your heart. The result is…

Another service offered to you at your GP surgery (primary care practice) is advice and immunisation before you go to another country. While you are likely to have the immunisations…

All New Zealand children are entitled to 11 free health checks from birth to three years. The checks aim to ensure that children are growing and developing as well as… 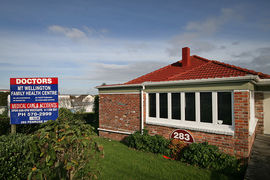 This page was last updated at 8:48AM on April 1, 2020. This information is reviewed and edited by Mt Wellington Family Health Centre.