Michael Davison was trained at Otago University, graduating in 1986. His ORL training was in NZ and he gained the FRACS in 1995.

After a year in Australia Michael took up a position with Waitemata Health at North Shore Hospital helping to establish the ORL Department. He remains employed by Waitemata Health and also has an appointment at Auckland Health within the ORL and Neurosurgical Departments.

Michael's private practice is based at the Lakeside Specialist Centre in Takapuna and he also operates at Southern Cross North Harbour in Glenfield and Gillies Hospital in Epsom.

Michael's experience and areas of specialisation mean he is keen to keep his referrals primarily to the above areas of interest, rather than attending to patients with the following concerns:

Michael has been a member of the Australasian Rhinological Society since 2003 and acted as the NZ representative on this Society from 2003 to 2005.

Michael is a past RACS Supervisor of ORL Training for the Auckland region serving on the College Training, Education & Accreditation Committee from 2001 to 2008.

Michael is a current RACS Fellowship examiner in the specialty of Otolaryngology (2016 -).

I am happy to see patients with or without a referral from your GP, however some insurance policies require a GP referral.

Please try to ensure you arrive 10 minutes prior to your first appointment as there may be some paperwork to complete such as the New Patient Confidential Information Health Questionnaire that can be found below.

Michael is a Southern Cross Affiliated Provider for consultations.

Michael is also a Southern Cross Affiliated Provider for the following procedures:

As a Southern Cross Affiliated Provider we will organise prior approval on your behalf which means you don’t have to pay for the procedure and then wait to be reimbursed. You don’t need to send in a claim form – we will manage the claims process directly with Southern Cross.

Free off street parking is provided at the front of Lakeside Specialist Centre. 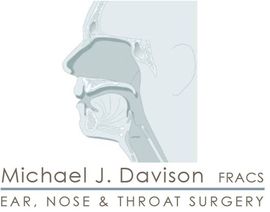 This page was last updated at 11:53AM on June 10, 2021. This information is reviewed and edited by Dr Michael Davison - Otolaryngologist.