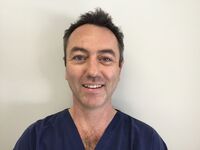 Simon grew up in Ireland and graduated from the University of Aberdeen in 1997.

After graduating, he worked in various surgical and medical specialties, in hospitals around Scotland and New Zealand. This included 4 months experience in plastic surgery at Canniesburn Hospital in Glasgow.

After returning to the UK in 2003, Simon finished his specialist vocational training in General Practice, and became a member of the Royal College of General Practice UK in 2006. He has been working as a GP with an interest in skin since 2004.

Simon was the clinical lead in minor surgery at his practice in Stirling for 5 years where he ran weekly minor surgery clinics. Simon was also a faculty member and teacher at the biannual RCGP minor surgery course at The Cuschieri Skills Centre, Dundee medical school for 4 years. Simon had the privilege of teaching GPs and GP trainees at these courses, minor surgery skills alongside a team of skilled nurses and dermatologists.

In 2012 Simon’s family left the UK and headed to Western Australia where he worked as a GP in Bunbury. He was awarded the Fellowship of the Royal Australian College of GPs during this year and gained a lot of experience in skin cancer diagnosis and management.

In 2013, Simon moved to Nelson with his family, and has been working here as a GP since. He became a Fellow of the Royal College of NZ GPs in June, 2016.

Simon works out of our Richmond clinic on a Monday and a Thursday.

Dr Simon Harbinson is available at the following service: