Dr Phill McChesney is a highly skilled New Zealand born and trained obstetrician and gynaecologist who is renowned for his caring approach and bedside manner.

In addition to specialising as an obstetrician and gynaecologist, Phill has undertaken 3 years of advanced training in fertility, reproductive endocrinology and minimally invasive surgery. He is one of the few fertility specialists in New Zealand to complete the Certificate in Reproductive Endocrinology and Infertility (CREI) subspecialist qualification.

Phill has extensive clinical experience and prides himself on thorough investigation and individualised yet evidence based management.  He is approachable, down-to-earth and enjoys an excellent rapport with his patients.

Phill’s private practice is based at Fertility Associates rooms in Remuera, Albany, and Hamilton, and at Karaka Family Health in Karaka, where he sees both gynaecology and fertility patients.

Training and previous positions
Phill graduated from Auckland Medical School in 2003. He then completed the Diploma of Obstetrics and Medical Gynaecology through the University of Auckland.  His specialist training was undertaken mainly in Hamilton, with time also spent in Auckland City, Middlemore and Tauranga hospitals.  Phill’s subspecialty training was undertaken at Fertility Associates in Auckland and with Professor Robert Norman in Adelaide, along with advanced laparoscopic surgery training in Hamilton and Adelaide. Simultaneously, he completed his Master of Reproductive Medicine through the University of New South Wales.  From 2007 to 2010 Phill was the RANZCOG New Zealand trainee representative and Chaired the RANZCOG trainees committee from 2009 to 2011.  In 2010 he was awarded the Fertility Society of Australia prize for best clinical research paper.

Since Phill’s return from Adelaide in January 2012 he runs a busy fertility, gynaecology and obstetric practice from Fertility Associates.  He has also worked part time at Auckland City Hospital.  Phill is currently a RANZCOG CREI subspecialty committee member and a member of the Endometriosis New Zealand Special Interest Group.

Most patients are referred by general practitioners or other specialists, but Phill does take self-referrals if someone is feeling concerned about a possible gynaecological or fertility matter.

Most initial consultations will take approximately 30 minutes, however this can vary.

Often a pelvic ultrasound is required to assist in diagnosis and treatment planning and Phill will usually perform this during the initial consultation.

A vaginal examination and/or speculum examination is also required in most circumstances.

Free parking is available at all locations.

Albany - free patient parking is provided around the Apollo Centre for Health and Wellbeing. Please allow plenty of time as the carpark can be busy

Remuera - parking is available in the adjacent carpark and if your ticket is validated at reception it is free.

Hamilton - free patient parking is provided in the forecourt at the Anglesea Clinic complex. Please enter at Gate 3. 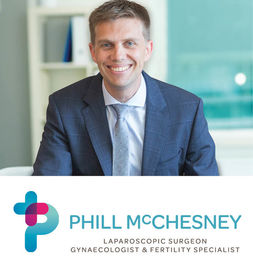 This page was last updated at 1:10PM on June 13, 2019. This information is reviewed and edited by Dr Phill McChesney - Gynaecologist.