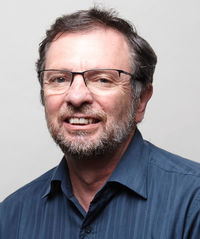 Barry graduated from the University of London (St Thomas's) in 1979 having also collected a B.Sc. in Biochemistry on the way. He worked for two years in General Medicine before training in Radiology in Leeds. He worked for a year in Wellington (1987) and emigrated to New Zealand permanently in 1989, coming to Waikato Hospital as Consultant Radiologist in 1989. He joined Hamilton Radiology part-time in 1997 and full time in 2006.  His main professional interests are Ultrasound (General, Musculoskeletal, Obstetrics & Gynaecological and Vascular), Interventional (Biopsy and Joint Injections), CT including interventional CT (Biopsy and Joint Injections), Chest and Cardiovascular Radiology.

Dr Barry Chatterton is available at the following services: