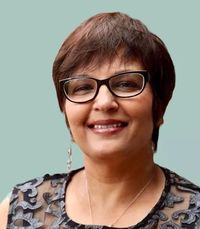 Krishna was born in Pretoria, South Africa and schooled in Laudium.

Krishna graduated as a doctor in 1989 and did her internship at the Chris Hani Baragwanath “Bara” Hospital – the largest hospital in the southern hemisphere. Thereafter, she chose to specialise in the field of Obstetrics and Gynaecology.

In 1998, Krishna commenced her private practice in Winchester Hills, a suburb in the south of Johannesburg and practised there for 19 years. During these years, she was actively involved in teaching at the University of Witwatersrand , where she was an external examiner for many years. Krishna was also involved as a founding member of the development of South African Endometriosis Society. She developed an interest in menopause management and osteoporosis and completed an international qualification in DEXA Bone Density scanning and also offered the service of DEXA Bone Density scanning from her practice. Krishna was a key opinion leader for many products such as Mirena IUS, various oral contraceptive pills as well as Cavaterm treatment for menorrhaghia.

In 2017, Krishna and her husband moved to New Zealand in search for a better life-work balance. After working at Christchurch Women’s hospital for a while, Krishna became keen to start a private practice. She wanted to continue with the same passion for excellence in gynaecology as in her Johannesburg practice.

Dr Krishna Lalloo is available at the following service: