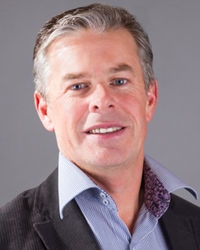 Dr. Richard Doocey is a clinical haematologist with a specialist interest in malignant haematology including lymphoma, myeloma, leukaemia and haematopoietic stem cell transplantation.  He completed a Bachelor of Medicine and Surgery at Otago University and the Christchurch School of Medicine, before completing his internal medicine and postgraduate haematology training in the Auckland region.

He became a fellow of the Australasian Colleges of Physicians and Pathologists in 2003 and undertook 2 years of subspecialty training in acute leukaemia, high grade lymphoma and bone marrow transplantation at Vancouver General Hospital and the British Columbia Cancer Agency.  Richard returned to Auckland in 2005 as a consultant haematologist and is currently Clinical Director of the Auckland City Hospital Haematology Service and the Auckland and Starship Children’s Hospitals Stem Cell Transplant Programme.  He maintains active membership of several international societies including the American Society of Hematology, the American Society of Blood and Marrow Transplantation, and the Haematology Society of Australia and New Zealand.

Dr Richard Doocey is available at the following services: