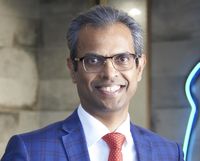 Dr Ved Prakash Singh (VP) is a graduate of the University of Bombay, India. He considers himself fortunate to have been mentored by great pioneers in Laparoscopic Surgery and IVF during his formative years in the 90s. After a stint as Senior Lecturer in Obstetrics and Gynaecology at the University of Bombay and Senior Registrar at National Women’s Auckland and Waikato Hospital, he was appointed as a Consultant in O&G at Waikato Hospital and Fertility Associates Hamilton in 2001.

VP is highly passionate about gynaecological surgery, particularly laparoscopic surgery. He set up an advanced laparoscopic training programme under the auspices of RANZCOG and AGES. VP is the Training Director of this programme based at Waikato Hospital and Anglesea Gynaecology. He has mentored many gynaecologists who have gone on to become trainers themselves.
VP is well recognised nationally and internationally for his expertise in laparoscopic surgery, endometriosis, pelvic pain and pelvic floor surgery. He believes in constant learning, innovation and collaboration in order to deliver the best care to his patients.

Use our online enquiry form

Get in touch online