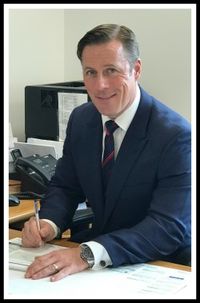 Peter was born in Liverpool, England. Immigrated to Hamburg, Germany with his family at age 4 and completed his primary and high school education there.  He served eighteen years in the German Army as a medical officer.  During this time, he studied Medicine in Berlin, Germany at the world renowned Humboldt University (founded 1810) /Charité Hospital Campus (founded 1710) and graduated in 1999.

After graduation from medical school and still serving the military, he pursued his interests to become an internationally trained surgeon.  The military sent him back home to Hamburg, Germany where he began his surgical training.  Next, he was stationed at the German Army Hospital in Ulm, then served six months in Landstuhl, Germany at the US Military Hospital and cared for injured soldiers returning from Afghanistan.  To complete his specialist training in Orthopaedics and Trauma, he left the military to work and train at the Kaiserslautern Westfaltz Hospital, one of the largest Orthopaedic/Trauma Centers in Germany. It was there, in 2011, that he garnered his certification as ‘Specialist for Orthopaedic and Trauma Surgery’.

Then in 2015, the call with an opportunity of a lifetime came!  In response to the call, Peter with his wife, Kari and his sons, Brendan and Joshua moved from the UK to the ‘best kept secret’ of NZ - Palmy!   After two and a half years in the public hospital, Peter looks forward to continue providing great service to the Manawatu community through joining the Aorangi Orthopaedic Centre team.

Mr Peter Schneider is available at the following service: