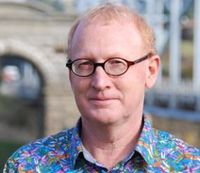 I was raised on a farm in Ettrick and in a way have come full circle returning to Alexandra about 13 years ago. After leaving school I first attended Massey University with the intention of becoming a veterinarian, however ended up completing a Science degree and then a Masters degree in Microbiology and Genetics. After a brief stint on the family farm, I spent several years overseas travelling. While doing my OE, I was based in London and worked in the ski business in London for several winters as well as on a ski field in Andorra. Most summers I spent travelling however I also worked for a season in the Islands of Greece as an Engineer on a yachting flotilla, which has to be one of the best ways to spend a summer anywhere.

After returning from Overseas, I made the decision to go back to University to study Medicine at the University of Otago. It was here that I met my wife Irene who was studying for a Master of Health Science/Bioethics while at the same time working in the neonatal intensive care unit. As part of Medical training, you are able to spend time abroad learning about how medicine is delivered there. Irene and I spent time in Mexico studying Dermatology which was an eye opening experience. We also enjoyed travelling to other parts Central America including Guatemala, but did not encounter Dr Ropata whilst there…

After training , I also completed a Child Health Diploma and worked in the Emergency Department at Dunedin Hospital, which I think has helped in my work here as a Rural GP. I worked and learned a lot with Dr Tony Fitchett in Dunedin who brought home to me what a GP really was. My time spent travelling and working in many different fields has helped with my day to day work as a GP dealing with people from all walks of life and cultures and has given me an understanding of who and where they are coming from. My particular interests are child health and palliative care. Recently I have joined the Otago Suicide Prevention Trust which I hope is making a difference enabling people to start the conversation about mental health.

With both Irene and myself having been raised in the country, we wanted to provide a similar lifestyle to bring up our children, Bella and William and so we came to Alexandra almost 14 years ago. In what spare time I have, I enjoy spending developing our garden or with my passion for Italian cars. Our family enjoys the peaceful surroundings of Alexandra and all that it has to offer.

Dr Nic Norman is available at the following service: